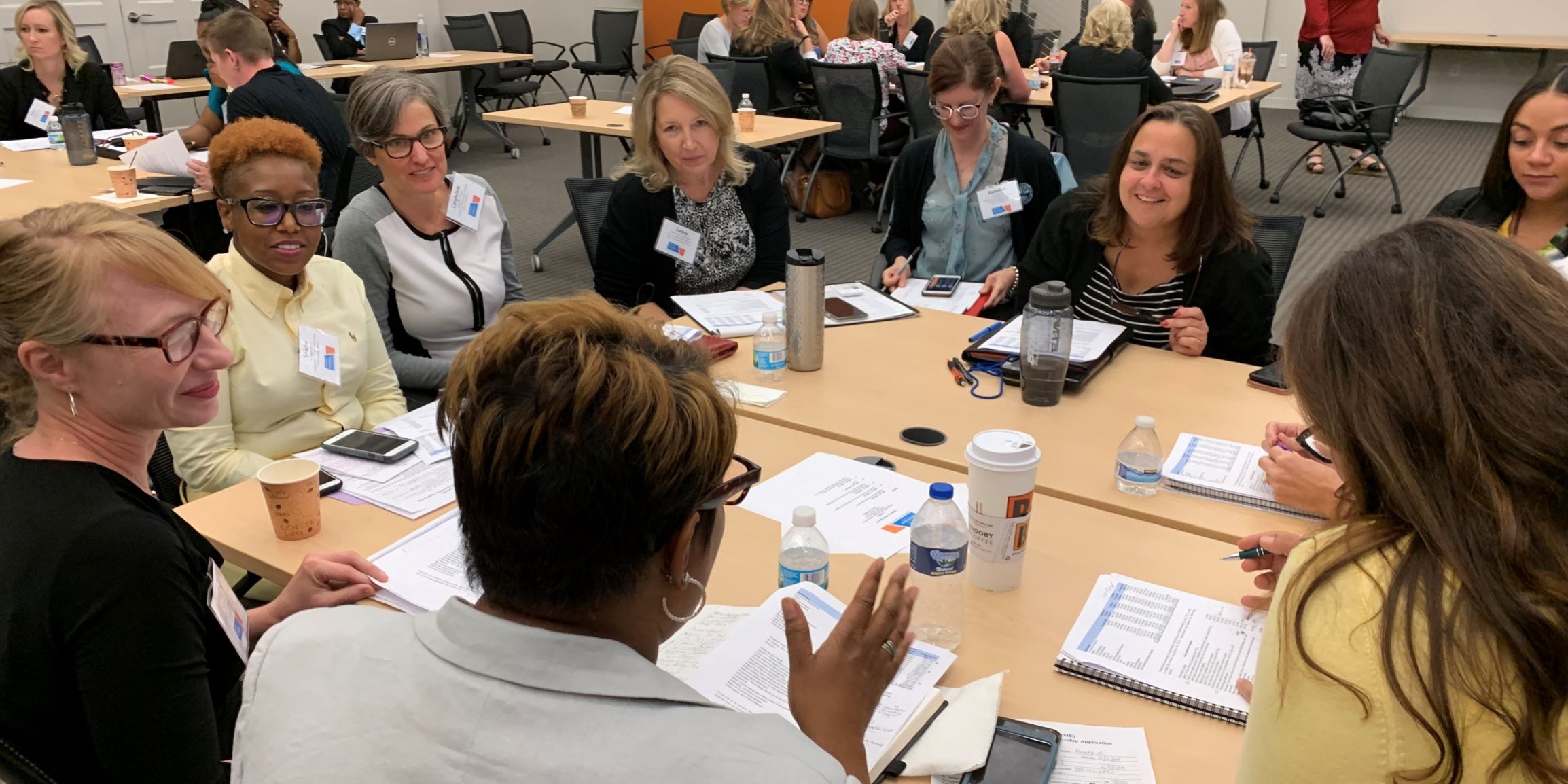 Transformative, bold action–that’s how the 16/50 Project is bringing gender equity to local government chief administrative offices. Women make up over 50 percent of Michigan’s population, but represent just 16 percent of Michigan’s municipal chief administrative officers. In 2018, the League unveiled our 16/50 Project to shed light on this issue, and to do something about it.

Most notably, we’re equipping women who want to lead their communities with tools and skills to step into the chief administrative role through our Women’s Municipal Leadership Program. WMLP brings coaching, networking, and critical topic training right in front of women eager to lead–and it has paid off.

One year after launching our inaugural program, five women from our initial cohort of 24 participants now lead Michigan communities.

Kim Awrey
Kim Awrey says it was a presentation by Mason City Administrator Deborah Stuart that allowed her to see herself leading her own hometown of Gaylord. The current city manager has more than 30 years of experience in everything from waste-water treatment plants to roads. The thought of following in his footsteps used to terrify her.

“Debbie talked about having a great staff and how it’s their job to know,” Awrey recalled. “You don’t have to have all that knowledge. It was like a load was lifted off me.”

Awrey, a controller and financial officer in the private sector for 23 years, was named Gaylord’s assistant city manager in January. She credits her training through the League’s Women’s Municipal Leadership Program with giving her the skills and confidence to apply—and get selected for—her new role.

“It made me more confident,” Awrey said. “I was lagging back. I wasn’t confident enough to apply. I think I would have done it eventually, but not as quickly as I did. Maybe on the next go-round. Maybe not in Gaylord.”

That confidence has translated to her everyday role, helping her with municipal finance and budgeting as the city begins its next budget cycle. She also serves as the city clerk and she’s continuing to dig in and learn as much as she can.  After all, Gaylord’s current city manager is planning to retire next year–and Awrey already sees herself stepping into that role.

Ellen Glass
Ellen Glass, former clerk for the Village of Vernon, started her job as the new Linden city manager on Sept. 3. She is a graduate of the inaugural class of the Women’s Municipal Leadership Program.

Glass holds a bachelor’s degree in Public Administration and Community Development from Central Michigan University. She also worked as a certified grant administrator for Michigan Economic Development Corporation where she assisted communities through the grant process for state/federal funding. In addition, she serves on the Executive Board of Directors for Saginaw-Shiawassee Habitat for Humanity.

Laura Lam
Laura Lam has worked with the City of Kalamazoo since 2009. starting as the community development manager and transitioning to director of community planning and development. In 2017, she was promoted to assistant city manager.  She holds a bachelor’s degree in Sociology/Psychology from Kalamazoo College, and a master’s degree in Public Administration from San Jose State University. Lam is a graduate of the 2018 Women’s Municipal Leadership Program and thoroughly enjoyed her experience during last year’s class.

“The WMLP was an incredible experience that helped me grow professionally and personally,” said Lam.  “Through the program, we were able to establish a strong network of powerful women that can support one another as we pursue our individual goals and our common goal of creating more female leaders in our state.”

Since completing the program, Lam earned another promotion–deputy city manager for the City of Kalamazoo.

Courtney Magaluk
Courtney Magaluk, WMLP 2018 graduate and former project manager for the City of Grand Rapids, is now the Scottville city manager. She credits the program with giving her more confidence when applying for city manager roles.

“Part of that was the education in areas that I didn’t feel were my expertise, like finance,” Magaluk said. “It gave me greater confidence that I do have some familiarity on this. I felt better moving forward and speaking about the critical skills needed to secure a city manager position.”

The networking and access to an executive coach made the experience particularly valuable, she said, adding that she couldn’t have had the experience without the support from donors and sponsors who made the program possible.

“I really appreciated the support of the donors who made it possible for me,” Magaluk said. “We don’t go into local government for the money. I would not have been able to afford it. To have a program that was free — and so well put together — was huge for me.”

Frances McMullan
Formerly the Ypsilanti city clerk, Frances McMullan credits the Women’s Municipal Leadership Program for helping her build her confidence and giving her the skills she needed for this new leadership position. During a webinar on the current state of women entering local government management, hosted by the International City/Council Management Association (ICMA), McMullen said the program gave her the push she needed to take on the new role.

“I had been an interim [city manager] twice, and my confidence level wasn’t where it should be,” McMullan said. “After this class, I was afforded another opportunity and I was chosen for that top position.”

McMullan also has three decades of experience in local government, a bachelor’s degree in public law and government/public administration, and a graduate degree in management.

The 16/50 Project is putting women in leadership positions right now – and together, you can help us do even more.

On Tuesday, Dec. 3, the world will come together to celebrate the holiday season by giving back and creating change – and the Michigan Municipal League Foundation kicks off Giving Tuesday with a campaign to build support for the 16/50 Project.

Join us on Giving Tuesday in standing together for future women leaders in local government – and making gender equity a reality for Michigan communities.

Mark Giving Tuesday on your calendar for Tuesday, Dec. 3, or just go ahead and make your gift now.

Emily Kieliszewski serves as the League’s Membership Engagement Specialist. In this role, Emily strategically coordinates with all areas of the League to connect members with resources they need; enhances member engagement through the execution of various outreach, programs, and events; and maintains strong relationships with League members. Emily manages the 16/50 Project and is also the host of the League’s Limelight podcast.

Developing Diversity in the Workplace: What Elected Officials Can Do
May 18, 2018